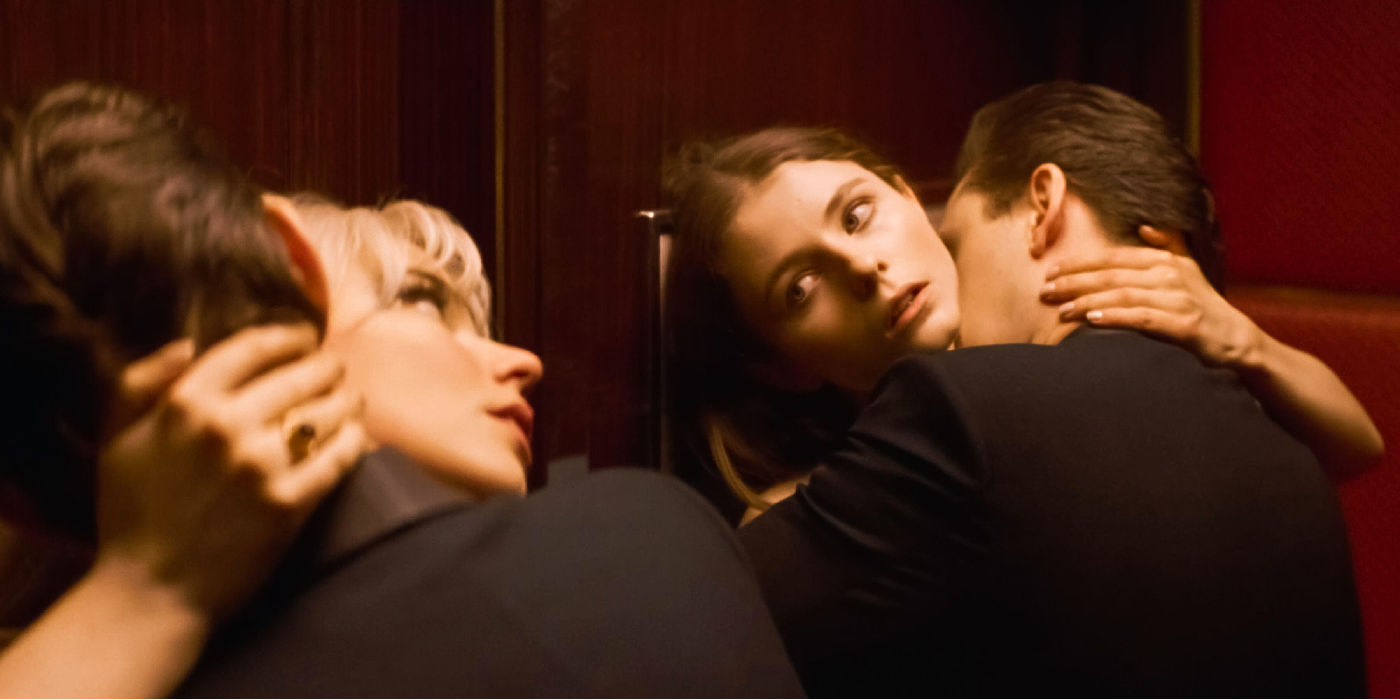 Ellie Turner dances in her bedroom and listens to 60s music when she sees her mother’s reflection in her mirror.  Ellie believes it’s a sign of good news.  Then Ellie’s grandmother, Peggy, calls Ellie downstairs.  Ellie got an acceptance letter from the London College of Fashion.  Peggy is proud but worried.  When Ellie’s mother went to London, her ‘gift’ overcame her, and she killed herself.  Peggy begs Ellie to take care of herself because she has the same ‘gift’ for seeing ghosts.  Ellie sees her mom all the time.  Ellie promises to call and keep Peggy up to date no matter what happens.  Upon arriving at the dorms, Ellie meets her roommate, Jocasta, another aspiring fashion designer.  The girls quickly bond over their deceased mothers, but Ellie discovers that Jocasta is a frienemy.  Soon, Ellie wants to get away from their toxic behavior and finds a room for rent.  Ellie rents a room from Ms. Collins and gets comfortable.  On her first night in the house, Ellie dreams she is in 1960s London.  And when Ellie looks at her reflection, Ellie sees a young blonde girl.  The girl’s name is Sandie, and she went to the Cafe de Paris to find the owner.  Sandie wants to become a singer and take over the London night scene.  The bartender tells Sandie the owner isn’t there but a manager, Jack, is looking for new talent.  Sandie makes her way over to Jack, and he quickly takes notice.  Soon they are on the dance floor, kissing and running away after Jack defends Sandie’s honor.

Then Ellie wakes up and goes to class.  Jocasta spots a hickey on Ellie’s neck, and Ellie remembers it’s from Jack kissing Sandie.  Soon, Ellie dyes her hair, dresses, and talks like Sandie.  The next night, Ellie watches as Jack gets Sandie an audition at a club, and Sandie wows the owner.  As Sandie wows in the past, Ellie’s 1960s inspired fashion impresses her teacher.  Ellie can’t wait to go home and go back to sleep.  When she is fast asleep, Ellie is in the audience.  She expects to see Sandie front and center, singing for the world to see.  But Sandie is another chorus girl in the burlesque show.  Sandie’s dream is a nightmare that will leave her looking at the business end of a knife.  This stab into reality will haunt Ellie until she learns what happened to Sandie and the man responsible.

This film mixes the paranormal with teen angst and mystery. As Ellie looks at Sandie’s life through Sandie’s eyes, Ellie is envious of Sandie’s tenacity.  When she learns the path Sandie’s life spiraled into, Ellie stands outside of Sandie’s body.  Ellie doesn’t see glamor and fame, but she sees the pain, addiction, and dirty money.  Being on the outside allowed Ellie to be more critical of Sandie instead of admiring her.  Like the saying goes, ‘Don’t meet your heroes.’  This movie gently weaves Ellie’s current life with Sandie’s past using music and fashion.  The film transports you when Ellie flashes back to Sandie’s life.  But you will slam back into reality when Sandie’s pain haunts Ellie in the present.  And the edits between Sandie and Ellie are flawless.  When Sandie’s end comes across the scene, it will be a poetic justice you were not expecting.  While the film does feel long and has an unnecessary romance, it is highly entertaining and will make you want to do a double-take.

Save yourself – Ms. Collins

Care for a demonstration – Sandie

It’s the least I could do – John

Barney Pudowski is a middle schooler with no friends, and his old friends, Savannah, Rich, Ava, and Noah, make friends based on their B-Bot matches.  Marc Weidell created B-Bots for the company Bubble.  The B-Bot connects to the Bubble Network, downloads the owner’s information, and finds friend matches based on compatibility.  Marc had a hard time making friends as a child, and he hoped the B-Bot would make things easier for other children.  Within months Bubble sold millions of B-Bots, except to Barney.  Barney’s dad, Graham, is a single, hard-working parent.  And Barney’s grandmother, Donka, helps raise Barney with her old-world charm.  Graham knows Barney is a great kid.  But when Barney doesn’t invite anyone to his birthday party, Graham starts to worry.  After seeing Rich and his friends tease Barny about not having a B-Bot, Graham rushes to the Bubble store, but three things stop him from buying the B-Bot.

The store’s closed, there is a three-month waiting list, and people can only purchase it online.  Defeated, Graham starts to walk away, but he sees a loading truck loading more B-Bots into the store.  He overhears the truckers say a B-Bot fell off the delivery truck and got damaged.  Graham purchases the damaged B-Bot from the trucker and gives it to Barney.  Barney can’t contain his happiness when he wakes and sees his B-Bot by his bed.  Barney puts his hand on the B-Bot, and it has trouble reading Barney’s hand scan.  After several attempts, the B-Bot scans Barney but doesn’t complete its download or connection to the Bubble Network.

Barney can see something is wrong with the B-Bot but doesn’t tell Graham.  After several mishaps, Barney decides to take the B-Bot back to the store and exchange it for a new one without telling Graham.  On their way to the store, the B-Bot, named Ron, sees boys playing on the playground and decides to make friends with them.  Without the proper protocols, Ron doesn’t compare social media information before initiating a friendship.  Barney knows the boys on the playground because they are his bullies.  When the bullies attack Barney, Ron beats up the bullies.  Barney knows that B-Bots aren’t allowed to harm humans, but Ron couldn’t download his safety controls.  Elated with his new defender, Barney decides to keep Ron and teach Ron how to be a friend.  Too bad that the video of the attack when viral.  Now Bubble knows it has a rogue B-Bot on its hands that scares parents and intrigues kids.  They have to find and destroy Ron before his code spreads.

This movie is I, Robot, The Social Network, and Big Hero 6 combined, and everyone in your family will love it (FTC Affiliate Disclaimer).  While it entertains, the plot covers complex issues like social anxiety, viral celebrity, online bullying, and friendship.  But it does it in a way that doesn’t get too heavy or preachy for kids while entertaining for adults.  Now, don’t be surprised if your child wants a B-Bot in the beginning.  However, by the end, it will change.  Also, the story gives insight into the inner workings of tech companies.  Often privacy and safety come second to profits, no matter how good the intentions.  And when users find issues, developers make patches in secret and baseless statements.  Adults and kids can use this movie as a starting point for a deeper discussion.  So get the family together and enjoy this film.

Are you my friend? – Ron

Friendship is a two-way street – Barney

I’m worried about him – Graham