In Maryland 1849, Minty lays on the ground and opens her eyes to see her husband, John.  Unlike her, John is free.  He got a lawyer to look over her master’s father’s will.  The will said Minty’s mother, Rit, and her descendants were to be freed when Rit turned 45, now she is 57.  John hands the lawyer’s letter to Minty’s current master, Mr. Brodess and he is furious.  He refuses to honor his father’s wishes.  He states that Minty, her children, and her children’s children will be his slaves forever.  Minty runs to the woods and screams in agony.  Then, she prays for the lord to take her master.  She turns around to see Gideon, the master’s son, standing behind her.  Gideon tells Minty her prayers are useless because God doesn’t listen to negroes.  That very night, Gideon’s father dies and he blames Minty.  Minty knows he will sell her as soon as he can, so she decides to run.  She tells John to wait for her down the road.  But Gideon gets to him first, so she keeps running.  Her father tells her to run to the church for safekeeping.  Minty is confused because Pastor Green preaches that runaway slaves go to hell.  However, he is quietly helping slaves escape.  He gives Minty instructions to run to Philidelphia.  After a grueling 100 mile journey alone, Minty is on free land as a free woman.  She is told to find William Still, chairman of the Anti-Slave Society.  William documents her story, along with hundreds of slaves, in his Underground Railroad Records.  He tells her she can pick a new name.  She chooses Harriet after her mother and Tubman like her husband.  For a year, Harriet lived and worked in Philidelphia as a free woman but something called her back.  Harriet tells William she wants to go back to Maryland to get her husband first, then get her family.  William strongly advises against her plan but Marie Buchanon, a proprietor, agrees to get Harriet someone else’s free-woman papers.  With the papers, etiquette classes, and a nice dress, Harriet is heading south.  She will become the woman who led an army, the myth “Moses”, and the legend Harriet Tubman.

This movie focuses on the struggle Harriet went through to become the abolitionist, conductor, and spy she became.  If you are looking for a movie to speak on the brutality of slavery, 12 Years a Slaves or Roots would be a better choice (FTC Affiliate Disclaimer).  This movie is different because it focuses on her triumphs and setbacks when she tried to save her family.  Some were sold, some died, and some decided to stay.  Then, the Fugitive Slave Act of 1850 was passed.  Harriet would have to help slaves run from the south to Canada to gain freedom.  While others tried to stop her, Harriet wouldn’t hear it.  She refused to stop until slavery was over.  This movie does cut her life work short.  It only mentions she acted as a spy, not the work she did.  It mentions she was apart of the women’s suffrage movement but doesn’t describe her role.  African American women often feel the need to chose a minority – race or gender.  If they fight for African American rights, they can’t fight for women.  If they fight for women, they are an enemy of African American rights.  Harriet Tubman was able to accomplish both in the 19th century.  That is astounding and deserves to be seen on the big screen.  While some will see Harriet’s “spell” as trying to excuse her works as being superhuman, it was brain damage that was explained as “spells” during her time.  Now, it would be labeled a concussion and brain damage, not messages from God.  This movie is a great starting point for her life story.  It should encourage you to do more research on who Harriet was to American History.

Which means their motivated – Pastor Green

I have not. I apologize – Marie

I forbid it – William

Get on your knees – Harriet 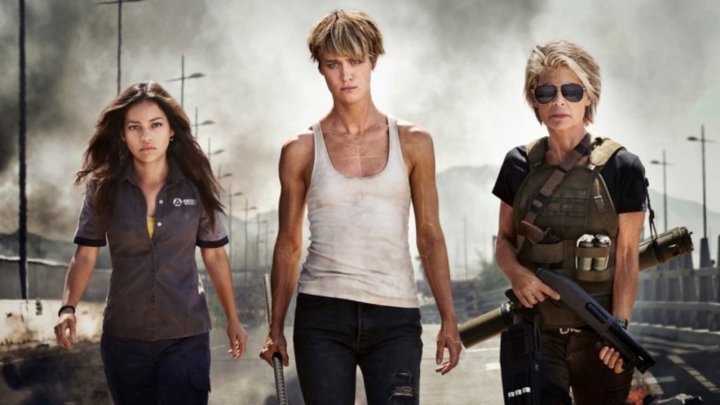 In 1997, Sarah sits and watches her son John order some food.  Without warning a Terminator walks over to John, pushes Sarah out the way, and shoots John at point-blank range.  Sarah is devastated.  Twenty-two years later, Dani and her brother Diego work in a factory.  She sees a machine doing Diego’s job.  Diego is called to the boss’s office but Dani goes instead.  She asks her boss if the people were there to keep sits warm until machines take their jobs.  She turns to see her father walking into her job.  She goes to greet him and someone shoots him.  That someone is Grace.  Grace tells Dani and Diego that thing is not their father.  He is a Terminator model Rev-9.  Unlike other terminators, this version has a cybernetic endoskeleton with a shape-shifting skin; a combination of T-800 and T-1000. This allows the terminator to split itself into 2 beings.  And it’s mission is to kill Dani.  Grace was sent from the future to keep Dani safe.  Luckily, they have Sarah Conner by their side.

It’s best to see Terminator and Terminator: Judgement Day before seeing this movie (FTC Affiliate Disclaimer).  The other Terminator movies are not needed to understand how this movie connects to the timeline or overall plot arc.   They incorporated Sarah’s videotaped psych evaluations in the opening sequence to remind the audience of the vision she had in the future that never came.  The action sequences are well-choreographed, expertly shoot, and had clean CGI.  One sequence that stands out is the highway scene.  Dani, Diego, and Grace are running from the Rev-9.  So Grace takes a truck and the Rev-9 steels a plow.  Before you can blink, Grace is driving backward into on-coming traffic with the Rev-9 on her bumper.  This action sequence is one of the best in the franchise.  However, some of the jokes fell flat and the dialog was subpar.  While it’s great to see this movie on the big screen, you won’t feel a need to buy it.  One viewing is enough.  Also, there are 0 post-credit scenes.

I am terminated – Sara